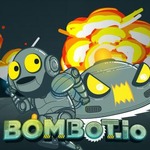 Bombotio is an epic multiplayer game with similarities to the poplar Bomberman series. In this game, you control a deadly robot and you must blast your enemies to pieces with your bombs. Use the D key to drop a bomb and use the 1-4 keys to switch between different types of bombs including remote bombs, mines and even an awesome atomic bomb!

Aside from planting bombs you can destroy the drums and obstacles on each level – behind some of these drums you can find power-ups that can improve your damage and survivability. Watch out for the moving sweepers that can kill you instantly and be sure not to get cornered by an enemy bomb! Can you reign as the Bombotio champion and conquer your robot enemies?