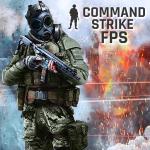 Command Strike FPS is one of the new games that attract online players of all ages. This shooter world opens up a great game space for players at https://abcya.games/. The game has different maps for battles. Join offline game modes like Deathmatch, Flag capture, and Missions. Many weapons are appearing in the game for you to unlock. Complete the challenges of the new shooting game we updated today. Use your skills to become a super soldier through battles. It's time to complete the special commando missions.

Try to win our game list and top the new battle. Become the best player with fast shooting speed. Countless online players have discovered the amazing game space we present. Move through the locations and join the battle to win with the highest score. Enemies can destroy you at any time. Each battle becomes a survival battle where you have to learn how to survive. Don't let your opponent beat you easily through each match. Therefore, be careful with the special journey we introduce at ABCya. New games all have gameplay and instructions for you to join after every stressful working hour.

What is the new way of playing that you used to take part in shooting games? Unlock every challenge with different weapons and powers through our new games. Can you use these guns? We share how to play for players around the world to unlock new missions. Do not hesitate to complete the world of online games with many games similar to Noob vs Zombies and Noob Torch Flip 2D. Learn how to use guns for the journey you have.

How to play: Keyboard: WASD G for the grenade, H for first aid kit, C for squatting, M1 for aim, M2 for shooting, SPACE for jumping, ESC for menu, SCROLL WHEEL for changing weapons