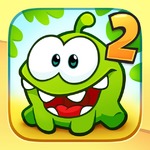 Cut The Rope 2 is an online free game at Abcya games , it's playable in browsers such as safari and chrome. You can play the game on smartphone and tablet (iPhone, iPad, Samsung, Android devices and Windows Phone).

Following the success of Cut the Rope games with over 400 million downloads around the world, Cut the Rope 2 has now arrived! With new characters, fresh gameplay elements, tricky missions, and, of course, Om Nom, candy collecting has never been so fun! Screenshot. Blue. Try your best and get the highest score. Play more game at: Puzzle Games

Instruction: play the game with your mouse.