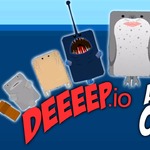 Welcome to deeeep.io! Deeeep.io is the new abcya popular .io game! Start as a fish, and eat to advance in the underwater food chain.

Some of the animals include:

More animals and places are going to be added in the future!

Deeeep.io is similar to Mope.io, but under the sea and with a simpler gameplay.

New abcya 4 game Deeeep.io. Your goal is to collect as many points as you can. In the beginning you will be able to collect and eat plankton only but when you get bigger you can start looking for some bigger prey such as smaller fish.