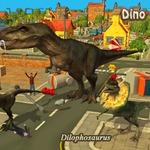 Dinosaur simulator is action, casual adventure abcya game, where you play as a crazy, angry, frenzy and stupid prehistoric dino in city. Your aim is to cause destruction, mess, wreck, demolish, ram, smash everything interactive and also annoy citizens. In your mission you gain points and experience, the faster you get them the more bonus you recieve. Town environment contains a lot of obstacles such as explosive cars, pixel fence, barrels, block lawns, streetlights, street hydrants, cube dustbins and many other.

Dinosaur Simulator: Dino World is a fun simulation rampage game abcya 2 in which you control a variety of different dinosaur species and trample through a cityscape. You must cause as much destruction as possible to earn a high score and to unlock new and exciting dinosaurs. You start with a Carnotaurus and can unlock an ankylosaurus, a raptor and even a mighty T-Rex!

Using the WASD keys you must move your dinosaur and smash anything in your path – you can destroy buildings, vehicles, trees – practically anything on the map! You can also collect cash to unlock new dinosaurs quicker. With 6 different levels to play on you can enjoy rampaging through a variety of cityscapes with your Jurassic friends! You can also play the wild animal version.

Have a great time at http://abcya.games

Use WASD to move and Spacebar to attack.