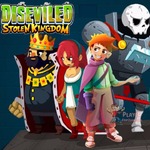 The long-awaited sequel to the Diseviled games series is here! Take control of a mage warrior, hero of the Diseviled Brotherhood, the famous demon hunters without whom life in the kingdom would not be so peaceful, as evil would have triumphed over and over. This time, a great challenge awaits our hero: to find the princess (as well as the crown and the king's castle) kidnapped by a group of demons led by a mysterious skeleton mage. Use your magic skills to pass the traps and beat hordes of enemies! Defeat powerful bosses at the tip of the sword! Be strong, do not give up and have fun!

Diseviled 3: Stolen Kingdom is an epic platform abcya 3 free game with retro graphics, a cool storyline and awesome side-scrolling gameplay. The story continues from the second episode and your castle has been stolen by black magic and your beloved princess has been kidnapped! As a powerful mage and protector of the castle, you must hunt down the thief's and try to save the princess!

You are equipped with a deadly sword and you must swing this with powerful blows to crush your opponents! You can also perform deadly magical attacks to destroy them utterly. Work your way through each level and see how the story unfolds. This is a fantastic addition to the Disviled series and will keep you entertained for hours!

Use AD or left/right arrow to move, W or up arrow or space bar to jump, C to attack, 123 to select a spell, and X to use a spell.