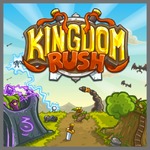 Kingdom Rush Frontiers is a game that combines Tower Defense quirky humor and fantasy gameplay.The goal is to build many types of towers to attack incoming enemies and stop them from getting past your defenses

KINGDOM RUSH FRONTIERS is an online free game at Abcya , it's playable in browsers such as safari and chrome. You can play the game on smartphone and tablet (iPhone, iPad, Samsung, Android devices and Windows Phone).

Kingdom Rush 1.082 Hacked. You've got ten times more money and full upgrades points. All skills can be used without purchase. This facilitates your fighting difficulties and gives you more energy to fight. Come to defend your kingdom, fight with witch, wizard, monsters, and evil spirit. Try your best and get the highest score. Play more game at:  Action games

Instructions: Use your mouse to control soldiers in the battle.