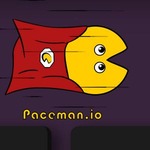 Are you a fan of the classic and popular Pacman? Then you must play this cool multiplayer online Paceman.io game abcya for school! Just type a nickname, choose a skin and join the fun. Your objective is to move around eating tons of orbs avoiding deadly traps and other players trying to eat you from behind. The more you eat, the faster your pace. Collect useful bonuses, but look what you eat, some of those might get you a little confused. Try to wear the crown as the king of the field and don't let other players eat you.

Eat or be eaten as you go in the world of arcade games at http://abcya.games! Control a Pacman-inspired character and eat all the others in Paceman.IO! Get the other players from behind to eat them and make sure you watch your back or you’ll be eaten as well.

Paceman.IO is an online multiplayer arcade game heavily inspired by the retro arcade Pacman. In this abcya 5 game, players will take control of their own Pacman-like characters with the goal of earning points and making it to the leaderboard. You earn points by eating the glowing spheres or by eating other players. Compete with dozens of players all around the world at the same time. Move around like a pro and try to make it to the leaderboard and become the top player.

Use mouse to play this game