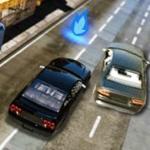 Play Red Driver 5 on abcya 2, Take on your rivals while you blaze down the streets of New York City's famous Chinatown district.

The epic 3d racing challenge goes into the fifth round. Red Driver 5 comes with 72 new missions, in which you have to put your racing skills to the test. Drive like crazy through all cities and use your nitro booster to give you that extra burst of speed to pass the other drivers as you try to avoid hitting obstacles. Your goal is to finish each track in best time without crashing your car.

Red Driver 5 brings you 13 game modes, 4 cities and 72 missions! Get ready for some serious driving, stunts, crashes, and more action!