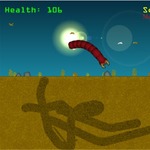 Control the Sand Worm attack the humans and gain points. Sand Worm is an online HTML5 game at http://abcya.games, it's playable in browsers such as safari and chrome. You can play the game on smartphone and tablet (iPhone, iPad, Samsung, Android devices and Windows Phone).

Sand Worm is a scary but interesting online game. In this game abcya free you need to gig through the ground as a big monster worm. Kill others and collect useful tools will help you get more score. Can you be the strongest worm?

Take the role of the dreadful Sand Worm and kill as many humans as you can. In this cool destruction game abcya 2, your objective is to move under the ground and surprise your attacking enemies to destroy all soldiers, tanks, helicopters and everything you can to earn points. Collect health and speed bonuses and don’t let them kill you with their bullets and explosives. Eliminate as many enemies as you can until they take you down and set the highest score possible. Enjoy!

Control the worm by arrow keys to move left, right, dig underground and fly in the sky.