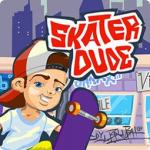 Daring skaters will be able to dominate the ground for skating in this Skater Dude game! In this new generation of arcade games, you will play the role of one skater on this four-lane platform. Instead of implementing two lanes like the platforms from ordinary games, the players are free to shred it up on the sidewalk to make a full four-lane path for discovering in this game at http://abcya.games/.

The task is to grab some spray paints and dash faster than the police to avoid being caught. While moving on the skateboard, let's pay extra attention to the scattered cans by the side. The more boxes, cones, and cans you can gather, the better your scores will be. Only the killer high scores from the top-notch players can be on the top of the game board. Keep your guard up when you see some old security guards chasing you!

Not only will you have to weave in and out quickly of obstacles but you also have to dodge the high barriers using your jumping skills. Moreover, collecting tokens is another important task that contributes greatly to the results of the game. The speed of the game slowly increases as you move through the levels of the game, therefore, it's best to master the skills before moving on to the higher stages. Other cool games such as Football Kick and Footyzag for the fans of skating await you right here at ABCya games online!

Left and right arrows to change the lanes.