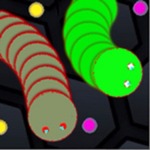 Slither Game is an online HTML5 game at abcya 4, it's playable in browsers such as safari and chrome. You can play the game on smartphone and tablet (iPhone, iPad, Samsung, Android devices and Windows Phone).

Slither Game is an interesting snake game, if you like this kind of game, don't miss our new game Slither Game! Your aim in this game is collect colorful dots to make yourself grow up and avoid other snakes. How long can you stay? Have fun at http://abcya.games/!

Slither Game - click to play online. Control your snake and eat balls to grow longer! But watch out that players smarter than you. Survive and eat long enough to become the longest snake in the game!!