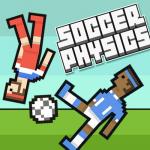 Soccer Physics is the newest game on abcya free online. Get ready for an frantic match at the soccer field. In the game, your object in the very addictive one-button game Soccer Physics is to score as much goals as you can to win victory over your opponent and reach a higher level. How many goals will you score?

The players on the pitch are fond of rolling to rolling, doing a variety of strange but funny action. Each team consists only of two players. Both of them you have to control at the same time. This time, you have to beat your opponent in which can be another player or the computer in a soccer game at game online abcya 2. Try to goal opponent's goalpost. If you use game controls randomly, you may lose the game. Tap with your friend and can't stop laughing. Note: Don't let your players to be kicked out! Let the fun begin!

If you like Soccer Physics, you should also check out Penalty 2014 and Real Tennis at http://abcya.games/. play it with you friends in the same screen.