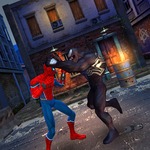 Game Spider Hero Street Fight abcya 3 Games - Join Spiderman on a new adventure by cleaning the streets of his city of criminals! Assist with very powerful punches and kicks while collecting weapons that will help you to annihilate the bad guys more easily.

Spider Hero Street Fight is an epic platform game featuring everyone's favourite superhero Spiderman! Spiderman is patrolling the streets as usual and trying to keep the civilians safe but there are plenty of bad guys on the loose and he must do whatever he can to stop them!

In this abcyagame, Spiderman uses his awesome martial arts powers and displays a variety of different punches and kicks to eliminate the bad guys. You must control Spidey and work your way through the city to clean up the streets and stop the villains! The controls are easy and the fighting gameplay is a heap of fun so put on your Spidey suit today!

Don’t forget to check out more with many interesting games such as Blood and Meat 2 and Short Life at http://abcya.games

Use Arrow keys to move, Z to punch, X to kick, C to block, and Spacebar to jump.