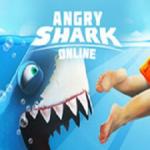 With shark games, players will become sharks and eat everything that is on the sea. Join Angry Shark Online's world at http://abcya.games/ today. You start moving on the sea and show your ability to explore in this game. Let's start this game. Don't forget to stay away from the bomb and those trying to kill you. You will lose blood if you collide with them. It's interesting when you become a shark and move on the sea.

Other creatures are scared of your appearance. You can eat a lot of different creatures. Earn points from those moves and win this game with your movement skills. The only thing to note is that you need to stay away from all the dangers lurking around you in this game. You can die or lose too much blood if you collide with them or get caught. Move in the ocean and chase other creatures.

This is the shark's survival instinct. This game limits the age of players at ABCya games online. If you love and want to relax with sharks, join the game and get the highest score when you have free time. Whenever you want to show off your abilities, join the game and share with your friends.

Teach them how to play and other elements in their play. Tips to play the games you collect will help players. Try to get the highest score in the ranking of the best players. We also bring players some new games similar to Cube The Runners and Run Race 3d.

Use arrow keys to move sharks, accelerate or decrease the speed