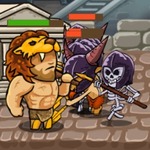 Heroes of Myth is a side-scrolling battle game at abcya play free games. In the game, you take control a group of Spartan soldiers and you need to defend the deity's temple. Fight off evil creatures with spears, swords and arrows. Try to destroy their temple before they can get to yours and earn new upgrades after battles. Much fun!

In the game at abcya free game online, fight alongside the Spartan warriors and a select group of heroes from Ancient Greek myths. Help your Spartan army fight the demonic hordes with help from the Gods of Olympus and your heroes Hercules, Perseus, and Achilles in this awesome defence game. Good luck!

Use different weapons like spears, swords, and arrows to defeat the enemies and win the war! During the game, you can also choose a hero and god to help you in battle; each has its own unique capabilities. Use money wisely to summon as many units as possible on the battlefield. Try to defeat enemies as fast as you can before they stack up! Upgrade your heroes, gods, and units to increase their power.

Please share and rate this game. Leave your suggestion about your favorite games. Relax with more similar games like Comic Stars Fighting V3 6 and Spider Hero Street Fight at http://abcya.games/.