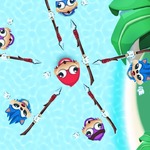 Find the way to victory in Knuckol.club! This .io game abcya sends you into battle with a deadly spear. Glide on the water and pierce your enemies to survive. You can dash to avoid being hit. Don't get stuck under a tree!

Avoid all spears for dem will instantly kill you, Make sure you keep that dash off of cooldown cause it can either save your life or cause you to lose it

Use your mouse to change the direction and use the left click to boost.