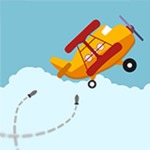 Missiles Again is an online HTML5 game at http://abcya.games/, it's playable in browsers such as safari and chrome. You can play the game on smartphone and tablet (iPhone, iPad, Samsung, Android devices and Windows Phone).

Are you crazy about airplane and tracking missile? Missiles Again is such an addicting airplane driving and avoiding game. In this game you need to collect stars and avoid tracking missiles and other obstacles like tree. How long can you survive? Good luck!

In this fun game you are an aviator chased by missiles. You will have to get rid of them by doing pirouettes or directing them to some object with which to collide. Remember to collect as many stars as you can.