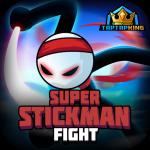 Fierce battles have begun at Super Stickman Fight. Get ready to start your journey as a real stickman warrior at ABCya games. With different combat scenarios, you have to fight your opponents and kill them. Collect different stars to upgrade your weapons in each game. Use all your power to fight enemies through dangerous and different levels. Don't let the obstacles get in the way of your battle.

Every player is ready to fight like a real hero in any war. Create the best way to move through the positions where you can attack the enemy. Avoid them so as not to be attacked. You have to fight against other stickmen and not be benevolent to them. Hear the sweet screams of your victims as you perform combat tricks and physics maneuvers until your opponent is annihilated. This is an interesting stickman fighting game that any player wants to join in their spare time. Drain your enemies' energy before they destroy you and win this new game. Collect stars in battle and use them to buy deadly weapons like swords, axes, and hammers.

Your opponents are also ready to use different weapons to attack. Fight in different levels with fire, saw, and other obstacles and use real ragdoll physics to avoid them. Saws can hit you. Stay away from them so as not to lose blood. The objective of the game is to control the stickman hero to fight against other fighting stickmen. Win each war at https://abcya.games/ and play in more games like Jump Bunny Jump and Kingdom Of Ninja 7. Save the trick you used to enter this game.