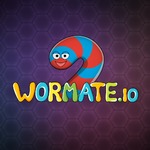 Recent studies of wormholes went so far that the whole project got out of control. We did not know much about wormholes, but now we have realized what is coming from them - hungry worms! These mutated worms are so hungry that your common fridge that you have at home is completely useless. They are able to eat tons of cakes, sweets, and other "sugarfree" products that would be enough for a small city. We cannot stop them, we have to fight them back. Our worms vs their worms, who is going to win? .io games at its finest!

Welcome to an another snake io game like Slitherio, but more colorful and with different yummy stuff instead of glowing dots, so if you like Slither.io you should definitely try this! Wormate IO is a smash-hit online game with a dynamic storyline and amusing graphics. The Abcyagame is free to play, so start growing your pets today - cute colorful worms. You can make an awesome snake with mods and skins that is optional for users. All worms in Wormateio aspire to become a real huge anaconda, that's why the little worm never stays still - he is ready to have a bite of tasty candies, cookies and other sweets scattered all over the playing field, but he is also in danger of becoming a dinner for other worms big and small.

Other players from all over the world are also wondering here for sweets and smash snakes, such as you! When you get success to destroy other players, they drop an unlimited number of different sweets for you after getting dead, you can eat them to gain a lot of weight and become large, which will give you many benefits. Their are also hidden bonuses and points you might find on the map, such as a magnet, weight gain, invulnerability and many other useful surprises. Try to become the biggest worm and be on the top of the rating list.

To control your cute colorful worm in Wormate.io you need only the mouse. Just move it in the direction you want your character to go and it will follow the mouse cursor. To accelerate - press left mouse button. Use Speed boost to run away from others and a tricky use of speed destroy them at the same time. But keep in mind that the more you accelerate, the more weight you lose and in result you will become smaller and smaller. If the head of another player touches your worm's body he will die and you can collect his points. But if you run into another player you will die.