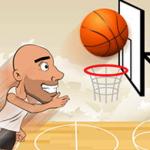 Many popular sports, including basketball, are based upon the use of the physics laws. Since a ball’s performance is directly influenced by many different factors such as its properties and the throwing forces, players need to pay attention to grasp the basics. You will learn how to control the movement of it in abcya land's latest game: Basketball Physics!

Not only is this a fun and addicting game, but it's also a great choice for multiplayer. You can choose between the single player and the multiplayer modes. Physics is not easy to understand and control, especially when it comes to an intense match. In order to do well on the real field, the matches in this game will give you a chance to practice online for free! Each of the team has two players with their distinguish shirt colors. You need to control your characters from your team to snatch the ball from the opponents and throw it into their basket.

Since there are two players on each team, you can change your players back and forth during the match. The best player is the one who can show off the breathtaking performance and the screen-shaking slam dunks. It's not easy to overcome two players, so do your best to keep up with the other team to score as many scores as possible now! If you enjoy the sports games, check out some more such as Douchebag Workout 2 and Mine Blocks at http://abcya.games

Click your left mouse to jump and throw the ball. Player 1 throws with Z key. Player 2 throws with M key.