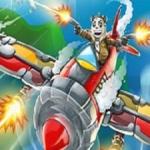 Become the heroic pilot and save your country with Panda Commander! Defending the air in any war must be one of the hardest parts, especially when you are on your own like Panda the Commander here at abcya free games. Whichever kind of air attack he gets, he will stand tall and try his best to defeat the invaders. This is the chance for you to join the game and prove your skills as a pilot while assisting the Panda in the task of shooting down the other planes.

There are guns equipped and geared on the top of his aircraft. All you have to do is to move the aircraft to two sides to create a straight-shooting line to the approaching enemy. Not only is this a fantastic arcade game where kids can have fun with intense flight and shooting but it also shows the realistic scene during an air attack. In order to progress through stages fast, a tip for the beginners is to purchase more updates from the stores.

During the first few stages, it might be easy to win. But as you reach higher stages, the enemies come in a large number so you need more firepower to dominate the battle. It's up to you and your own plane to break the enemy's defense line and keep your country safe! Also, keep in mind that you have to keep check of the airplane's energy level to prevent crashing or colliding. It's generally fun to play games with the same theme like this such as Spellsword: The Last Crusade and Rearrange Letters 2 at http://abcya.games, so check them out as well!

Drive the plane with the arrow keys.