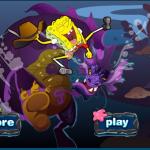 The dinosaurs became extinct, but only on the ground and in the water are still a few giant aquatic lizards like the Loch Ness monster, but SpongeBob found underwater Tyrannosaurus rex, who decided to ride on it and make a jump. Nurse on the seabed at a prehistoric monster, jumping and skipping stones in the narrow arch - it's great fun!

Adventure with Spongebob! You need to help Spongebob Gather gold coins and energy on the adventure trip. Beware! Attention to escape the seabed flora and fauna. Ride a cool purple dragon, let's go!