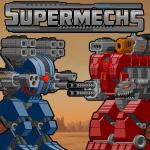 Design and customize cool battle robots, fight against other players and constantly upgrade your war robot in the fun-addicting tactical shooting game SUPER MECHS! You start with a small robot with primitive weapons and little armor. Select details and drag them to an empty platform to build your first robot, after that you will be able to participate in the competition against another war robot and earn money for the upgrades. In the SUPER MECHS game, you and your enemy are allowed to make only one move and shoot only once per turn. Choose the suitable weapon and try to cause the maximum damage to your opponent. You can also move closer to your target or take a step back for a better precision. While fighting, you have to pay attention to the indicators overhead: hit points, heat and energy. Energy is consumed by performing certain actions and using electric weapons. Heat is generated from firing weapons, if your engine is overheated, the robot will automatically shut down.

Hit points are themost important ones, if you run out of these points you will die and lose the match. Every successful shot will take some of your enemy's hit points away, the number depends on the weapon you use. If you defeat your opponent, you will be able to buy new mechanics, engines and more powerful weapons. The Super Mechs battle game allows players to play in 2 modes in the abcya game online: Arena and Campaign. Choose Arena if you want to fight against other players' robots in online mode. In the campaign mode, players are in charge to accomplish different missions, gain levels and unlock new lands. To get to the higher level, you must collect a certain amount of experience points, taking part in as many fights as possible. Choose which mode you like best and let the war begin!

Do you want to show your skills and style? Don’t forget to play more with some similar games such as Assault Zone and Ultimate Douchebag Workout at http://abcya.games

Use MOUSE to build and control your battle mech and press a weapon icon to fight in the SUPER MECHS game. Buy and open item boxes in the game shop if you are out of resources. In the workshop you can equip your battle robot with all the upgrades you've bought and also see how much heat points adds every weapon and how much energy and hit points does it take away. Super Mechs players can also communicate with each other, for that enter a chat room in the arena mode.