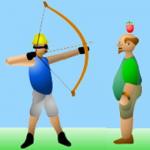 Apple Shooter: Arrow Game, Shooting an apple off someone's head is very dangerous. Don't try it at home. Try it in this abc ya free game instead!

This game was inspired by Wilhelm Tell. Grab bow and arrow and try to hit the apple on the head of your friend. Control the strength of every shoot by holding the left mouse button, the strength will be depicted on the left corner of the screen.

Your goal is to apple, so you must concentrate and be careful of archery. If accidentally missed. Your friend will be miserable Will you lose a friend or lose an apple? the depends on how your archery level.

Don't hit the body of your friend or the Apple Shooter game will end immediately. Each level positions you further away from the target. Click to play the game Apple Shooter now!

Is it attractive enough for you? If you want to explore more, you can play with this list of games like Hanger and The Visitor at http://abcya.games/. Why don’t you try to play and give some comments? Have fun!

Apple Shooter was originally a flash game, but has been ported to HTML5, so that it can be played on both desktop and mobile devices!