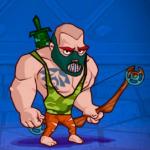 Brute Arena is a role-playing game where you are a lanist who sends his fighters into crashing pvp battles on the space arena.
Build and develop you brutes abilities, get the best weapons and slay rivals in the crashing pvp fights for valor!

It depends only on you who will be the winner in this crushing war!
Combine the best weapons and the most powerful combat skills to create your fighting champion.

You may also like: The Amazing Spider-Man and King Of Chaos

In today’s well made game, you’ll find yourself in an arena, fighting against your enemies. You need to use all of your skills to neutralize your opponent. You have the best weapons at your disposal. Try to stay alive and neutralize everyone who’ll be going after you. The fights are starting up automatically and the players get assigned to you randomly. You can customize your hero as you like.

Brute Arena is an action game in which you are an arena master that needs to send the best fighter into crashing PVP battles in the space arena. Build and develop your brute's abilities by getting the best weapons and slay rivals in the crashing PVP fights for valor!

Use left mouse button to interact and play.