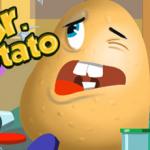 Mr Potato is an online fun game at Abcya , it's playable in browsers such as safari and chrome. You can play the game on smartphone and tablet (iPhone, iPad, Samsung, Android devices and Windows Phone).

Mr Potato is an interesting and fun arcade game,Our Mar Potato is so cute but  Mr potato was trapped in a dangerous building and you need to help him avoid all deadly obstacles and knifes and many other challenge. Play more game at: Abcya 3