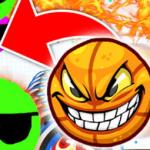 Have you heard of Agario games? If you are not familiar with the term, how about trying out Tricksplit .io from Kindergarten land to experience this new types of games? Not only is this another fun-addicting survival game but it also allows multiple players to compete on a large map for IO games.

You will start the new journey with a cell that grows to absorb everything it touches. At the beginning of the game, the cell appears to be small and weak, so your task is to help it move around the map, look for many small orbs to eat. Only by eating the glowing orbs will your cell be able to become the biggest cell and avoid the attacks from other opponents. The most prominent rule of this game is that only bigger cells can eat smaller cells.

Despite the rule being simple, the creators at http://abcya.games/ added lots of special features to make this IO game more challenging. If the cell becomes too big, you can choose to split. Splitting the cell will allow you to dominate more territory on the map. However, the pieces of the cell will become weaker after each split and can easily become the new targets.

The best player is the one who can take advantage of this feature and choose the perfect timing to split and regroup. A lot of games like this such as Retrogrid .io and Starjack .io gained the attention of the kids.

Use the mouse to move, Space to split into smaller cells and W to eject mass.