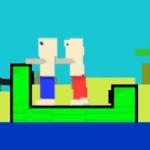 More and more games are being created with the idea of letting many players enjoy the game at the same time. With such idea in mind, Abcya 5 online added Tube Jumpers - a multiplayer game for both the adults and the kids. This is the game which can be played with up to four people.

Each of the players is assigned a different button to control his character. In this Abcya 2018 game, you have to make sure to stay on your own floating tube. There will be many items and even sharks which will jump out of the water and hit you straight in the face. There will also be lots of obstacles such as huge waves, gigantic wales, beachballs and many similar things. In order to stay alive, you need to move forward and jump up and down but make sure to land back on the tube at the end. Paying attention to your character position is an important point.

The moment you fall into the ocean, the game is over. Let's compete with your friend to see who has the best ability to keep balance. The simple graphics, the addictive gameplay with the pixel theme captured the attention of so many players. There are 3 game modes: 1 vs 1, 2 vs 1, and 2 vs 2 for you. You can also choose the fullscreen feature to optimize the experience. Try out more fun games such as Amigo Pancho and Zombies Eat My Stocking in http://abcya.games.