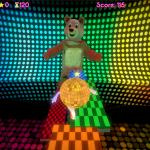 Emerge in the light of the funky disco ball and show your best moves on the glittery disco floor in Disco Jumper! The game comes with such a unique main character: a running disco ball! Your disco ball has arms and legs and it can also jump. As the player, you need to control the left, right movements and also jump over platforms and gaps to maintain the run.

This Abcya game is an awesome choice in which you control your ball through a never-ending disco floor. In order to stay alive for as long as possible, pay your best attention to avoid different obstacles in your path. Not only do you have to avoid them, you also need to land in the right spots. Do you know that the pace will pick up after a certain time? This is the reason why you need to estimate and control carefully so as not to fall down the edge of the floor to the lower levels.

In a Abcya game for kids with the disco theme, the best part is that players can listen to the awesome music and even time your jumps and movements according to the beat. Can you keep the disco ball shine throughout the whole trip? Experience the colorful arena in http://abcya.games and try out some other games such as Hurdle Rush and Magic Piano

Use A, D or left, right arrow keys to move, use the spacebar to jump.