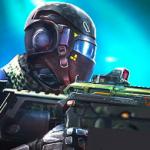 Are you ready to bear the responsibility of an elite soldier in Combat 5 shooting game? In this game at http://abcya.games/, you will play as a super-soldier whose job is to save the world by clearing out all the terrorists and bosses. First, pick a server or a room to try out different modes. Each of the servers has its own features and maps to allow all players to enjoy the game. Your main goal is to kill the ultimate bosses to become the leader of the match.

Before you reach the bosses, it's crucial for you to survive the attacks of the weaker enemies. There are many weapons scattered around like machine guns, sniper rifles or shotguns. Use them wisely to carry out the mission efficiently. You can also throw grenades to cause massive damage when there are too many enemies. There is a total of 5 customizable classes in this abcya 4 game. You can activate a specific skill by earning and spending Skill Points from each match.

Not only is this a fast-paced story game with various challenges but it also takes you from Tokyo to Venice thanks to various game settings. It's the perfect shooting game for the boys to challenge their friends and have a fun time together. If you are a fan of shooting games like this, don't hesitate to check out some other choices like Hangman and Masked Forces Unlimited

Use the arrows and W, A, S, D to move, Mouse to aim and shoot, Space to jump, Shift key to run and C to crouch down.