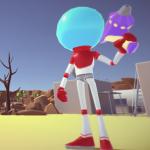 In most shooting games, the player needs to shoot all the dangerous enemies and opponents to stay alive. But this idea seems to get a little bit boring after too many matches. Now Abcya onlne 5comes up with a new game: Rails Shooter Fantasy Shooting Game!

Unlike the ordinary games, your targets in this game are the dangerous plants and scary creatures. This is a simple shooter game which takes place in a desert environment, with the creepiest enemies like worms, rails, manta and so on. Therefore, the players have to move around to fully discover every nook and cranny of the map and kill the enemies with the guns. The map has hidden guns and pistols and an environment with great graphics.

The difficulty level is higher than that of ordinary games due to the fact that the game is over when you get shot at too many times. There will be some destroyable objects that can give you an item, so keep an eye on them. At the end of each level in this Abcya games online, your skills such as accuracy, completion will be assessed to show you the result of the training. All in all, don't miss out an intense shooting game in a fantasy world. Join more shooting games online for free in http://abcya.games/ such as Tube Jumpers and Amigo Pancho